MMB: What is Missing from Dart’s Internal Review?

To start with – the internal review itself is missing. 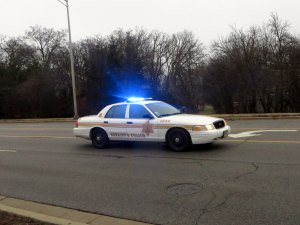 Frank Main from the Sun-Times published a piece on an internal review conducted by Sheriff Dart detailing what Main wants us all to think are excessive continuances in criminal cases. Main pushes Dart’s line that this is due to judges granting inappropriate numbers of continuances in cases.

This whole piece reads as if Dart himself called Main and said, “We have this internal review we would like you to write about, but you cannot circulate it.” Things like this should never be trusted. This is especially true in Dart’s case as he is an extremely talented self-promoter who likes to make sure he stays in the news.

This article once again is proof why academic research is sooooo much better than most journalism. To be fair, there are major time constraints on the production of most journalism, but that does not mean that articles like this cannot be better. In this case, much better.

First off, the internal review that Main cites is nowhere to be found. Main doesn’t release it and it certainly isn’t on the Sheriff’s website so there is no way to adequately judge the credibility of the methods in this review. We are left trusting Main that the so called “internal review” is methodologically sound. He certainly hasn’t earned that right. Neither has Dart. Show your work gentlemen.

“Dart’s office looked at 888 cases involving people held at the Cook County Jail while awaiting trial or out on bail and in the sheriff’s electronic-monitoring program. In each of those cases, criminal charges had been filed at least two years ago. Most of these defendants are charged with murder”

Does it not seem a little weird that someone would do a study and the group would not be homogeneous?

Why did Dart include what we can only assume are a small number of cases that are not murder?

How did the group of miscellaneous cases affect the results of the study?

Are the cases Dart looked at the only cases where charges were filed over two years ago, or were they some subset of those cases?

If it was a subset, why were these cases in particular singled out?

“Heading that delayed-justice list: Associate Judge Thomas Hennelly with 46 such cases, including the case with the most of what the legal system calls continuances by agreement — more than 230. That one’s an unusual case. It involves a murder defendant named Derrick Pearson, who was charged with murder in 2010 and convicted in 2014. His conviction was overturned, and he remains in jail awaiting a new trial.

Among factors that appear to have helped push Hennelly to the top of the sheriff’s list was that he took over the cases that were before Judge Thomas Gainer Jr. after Gainer’s retirement about a year ago. Also, Hennelly’s caseload includes a large number of murder cases, some in the post-conviction stage.”

Why was Hennelly included if Main can so easily find factors that seem to contribute significantly to why there are the number of continuances there are?

Why include the case with the 230 continuances if in the next line you explain it (besides the fact that you are exploiting the number)?

“Dart says it doesn’t make sense to have such delays. He points to the case of Dylann Roof, the white supremacist who fatally shot nine Black people at a church in South Carolina.

““From the time he murdered them to the time he was sentenced to the death penalty was 18 months,” he says. “You’re telling me we have a more complicated case in Cook County?””

Yup. Sheriff Dart has solved the entire issue of how long murder trials should take by pointing to a single case as proof about how all cases throughout the country should be handled. Of course, this statement is unchallenged by Main. Horrible. Roof is a white supremacist mass murderer who confessed on video to his crimes. One might think that a videotaped confession and a manifesto published online might make a trial a bit quicker.

An issue with the entire article is that there is an unstated assumption that the continuances are bad. I don’t find a single thing in this article that proves that they are bad. This very quote cites the fact that in the review the cases average 65 continuances, which were all agreed on by both sides. Is this a bad thing? Is this somehow infringing on the rights of the accused? I am open to be persuaded but Main does none of the legwork needed to make a coherent argument.

Also, Main doesn’t force Dart to respond to an important argument from Mary Wisniewski, director of communications for the office of the chief Cook County judge.

“The potential danger in uniformly pushing cases forward, Wisniewski says, is this: “If cases are forced to trial prematurely, the case will be appealed, and the judge will be reversed.”

Why isn’t Dart forced to respond to what seems a perfectly valid concern? Because when you are Main and are being fed a story by the Cook County Sheriff himself, you don’t challenge the assumptions he is putting forward, you just put them in the article.

Main also notes cases with what he makes the reader think are very high numbers of continuances but then in the same breadth talks about their uniqueness. Why cite outliers to try to prove a point and not actually dig in to the cases that are more representative of what is going on every day in the courts? Maybe because Dart wanted Main to highlight the outliers to help reinforce the point he is personally trying to make. Main’s job is to challenge those points directly. There really was no challenge in this article.

One other quick note to Chicago journalists. The figure of $190 being the cost per day to house someone in Cook County Jail is basically crap. It suggests that if John Smith spent one day less in Cook County Jail the taxpayers would save $190. Totally untrue. There are no savings to be found in the jail unless they close an entire tier. That is when the taxpayers would realize any savings in the cost to house people. One less individual on a tier makes no difference at all in the cost to administer the jail. Dart knows this. Main knows this. It didn’t stop Dart from pushing this fraudulent figure, and it didn’t stop Main from printing it.

This is the quintessential problem with the relationship between crime reporters in Chicago and criminal justice officials. Far too much propaganda gets into the press through the willing actions of Chicago reporters.