Passing stenography off as analysis based journalism

Reprinting numbers provided to you by the CPD’s media department is not “conducting an analysis,” it is being a stenographer.

I am always amazed at the propensity of our local newspapers to splash headlines across the front page of their papers for stories everyone already knows about, were originally reported years ago and repeated many times since.  The recent story by David Heinzmann of the Chicago Tribune titled “No-snitch code’ frustrates police” is one such story.  Despite the catchy headline, this is a story that we have seen in the Chicago papers many times over the last four or five years.   Regardless, I thought it would be interesting to look at some of the assumptions that are contained in the story to see what we could learn from them.

“Chicago Police have suspended nearly 80 percent of their investigations into nonfatal shootings on the grounds that victims wouldn’t cooperate, according to a review of more than 1,100 cases through the first seven months of this year.”

First off, what does “review” mean?  Did Heinzmann actually sift through all the reports for all the crimes in the Chicago Police Department (CPD) records that include a nonfatal shooting?  To answer this question you also need to know that nonfatal shootings can be classified under different crime types depending on whether someone was shot or shot at, and whether the gunfire occurred in furtherance of stealing possessions from the victim, which would then be categorized as a robbery.  The remaining categories include aggravated battery & aggravated assault.

It is very important to know how the number was generated because it is possible that Heinzmann did not go through the reports himself and relied solely on the numbers the CPD generated for him.  Also, if he didn’t go through the reports himself, then one has to ask how the CPD generated the number.  They don’t collect this data in the structured data fields that make up their CLEAR database, so if they do maintain this data electronically, it would only be in the detective supplemental reports that are just long narratives and are not parsable.  I have serious doubts that the CPD opened the detective supplemental files to any of these cases to Heinzmann, let alone 1100 cases scattered throughout the city.  I also seriously doubt that the CPD spent staff time going through the 1100 reports internally.  So, this leaves us with only two options: the detective division within the CPD maintains this data in an unofficial manner that Heinzman was unable to validate but used anyways or the number is really just a fabrication the CPD fed to Heinzmann in an attempt to use him to spread propaganda.

“A suspended classification indicates all investigative leads have been exhausted, and that the case cannot proceed further at the time it is reclassified to this status.”

Of course, the definition provided by Biggane can easily include the types of cases that Heinzmann is talking about in his article.  The problem arises when you try to fit the cases that are included in Biggane’s definition into the narrow definition of the suspended classification that Heinzmann details.  Clearly the reverse doesn’t work, which then presents significant problems for the story that Heinzmann is telling us in his article.  There is no way that the CPD could possibly explain why all 1100 cases have been classified as suspended without going through each case file to see why the classification was applied to the individual case.   The fact that Heinzmann does not cite the source for the use of the statistic makes you think it was determined through his “review” of the case files, but it seems highly unlikely that this is possible.  How did he get that number?  It certainly seems like it is something some detective told him off the cuff without ever backing it up and it somehow made it in to the paper as a fact that was uncovered through Heinzmann’s exhaustive research.

“But for now, the inability to solve the vast majority of shootings only aggravates the homicide problem”

Well, one would think the inability to solve shootings has always been a thorn in the side of the CPD and their efforts to reduce homicides.  Now, what would really help communities to understand what is going on in 2012 related to unsolved nonfatal shooting cases would be a nice graphic telling us how many nonfatal shooting cases over the last five or ten years the CPD has actually solved.  Only then would we have the context needed to determine if the number of unsolved nonfatal shootings has gone way up this year, or is on par with the previous five or ten years.  If it is on par then of course it would be hard to argue that this factor has much to do with the rise in homicides the city is experiencing.  Of course, the number of nonfatal shootings still waiting to be solved (or suspended) is not provided.  If Heinzmann actually did go through the files himself, then it is understandable because he wouldn’t have the time to go through five or ten years worth of cases.  Now, if the CPD pulled this number out of thin air I don’t see why Heinzmann just didn’t ask them to make up some numbers from previous years.

“CPD statistics show 80% of investigations into nonfatal shooting cases through July were marked as “suspended” for lack of cooperation or closed because witnesses wouldn’t cooperate against a suspect – a category known as “exceptional cleared closed” in the department. “

Once again, Heinzmann narrows the definition to fit the story rather than provide his audience with the whole truth.  Exceptional cleared closed includes much more than a witness not cooperating, like when the CPD has:

These definitions for the various case status such as closed, open, exceptionally cleared closed, etc.. are clearly detailed in the Uniform Crime Reporting Handbook, which you can get a copy of near the bottom of this page.

The problem with using the exceptional cleared closed categorization for cases when the CPD says they have identified the perpetrator but witnesses are not cooperating is this: how do you validate that specific categorization?   It certainly seems like the police could use that to their advantage to make it appear like they have solved more cases then they really have.  I am sure there are times when the CPD has identified someone they believe is the shooter and the lack of witness participation hampers their ability to arrest the suspect, but measuring that number in a valid and reliable manner is nearly impossible without unprecedented access to CPD personnel and records.  Of course, validating the CPD’s claims is not a problem for someone that makes no effort to do it.

Data without context is useless:

You cannot look at the data from a single year and definitively draw conclusions without knowing where those numbers are situated in the recent and not-so-recent past.  It might very well be that, compared to the last five or ten years, the victims in nonfatal shootings are cooperating more than they have in the past.  Now, that was clearly not what the CPD wanted communicated so they only provided Heinzmann with data from this year.  Absent any context, these numbers provide readers with little information because we have no idea what they really mean.   Also, since Heinzmann only provided the narrowest of definitions for each of the categories, it is almost impossible to make sense of anything in this report other than the CPD is being crippled by the “no-snitch policy” at work on the streets.  They just don’t want you to be able to determine if that policy is hurting them more this year than past years. 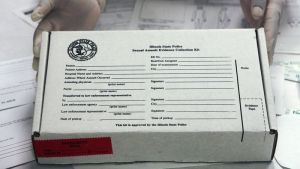 Data Brief: Rape Kit Backlog – What We Do and Don’t Know

The first step to solving the rape kit backlog crisis is to understand the actual extent of the problem. Unfortunately, decades of badly-kept records, unclear 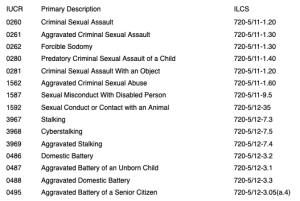 This FOIA request is seeking case statuses on what are traditionally called violence against women (VAW)crimes. These types of cases fall under two categories: domestic