It is imperative that communities understand the police arrest for purposes other than prosecution. Chicago has been the beneficiary of some recent great reporting (link 1, link 2) by Ben Javorsky and Mick Dumke regarding the seemingly meaningless arrests made for low levels of marijuana possession by the Chicago Police Department.  The reality is that these arrests play a much more important role than people in Chicago understand, which is why, even in 2011, the Chicago Police Department continues to rack up these arrests in such large numbers, despite the low conviction rate for such crimes.

Good research on this topic:

What Chicagoans need to understand is that the Chicago Police Department (CPD) views arrests for low levels of pot possession as a vital tool in getting “the bad guys” off the street, even if it is for a short period of time.  This is the main reason why Chicago has not moved to start issuing tickets (in the form of a municipal code violation) instead of making arrests.  The police typically have little problem finding a youth of color they consider to be a gang member holding a small amount of marijuana.  The police arrest the individual without even thinking about the possibility of a prosecution or conviction because the arrest is really being made just to get the individual off the street for a period of time.  Officers feel that if the “bad guys” are in lockup because of a marijuana arrest, they cannot be on the street perpetrating violence.

This principal of arresting the “bad guys” for low level crimes as a tool for incapacitation is really at the heart of the strategy that has been brought to Chicago – from New York by way of New Jersey – with new Chicago Police Superintendent Gary McCarthy.  “Quality of life policing,” which McCarthy has been quoted saying he was bringing to Chicago, has its basis in arresting potential violence-doers for whatever minor law violation the police can.  The criminological theory behind this tactic is based in the “broken windows” perspective made famous by the New York Police Department.  This certainly seems to signal that the number of arrests for low level non-violent crimes is about to be seriously increased and not reduced under McCarthy’s administration.

Sadly, most New York Police Officers experienced first hand the correlation between this type of policing and huge drops in violent crime.  The problem, which all social scientists know, is that correlation does not prove causation.  While New York experienced historic crime drops so did the remaining 98% of the US, which obviously enough were being policed by agencies (around 18,999 of them) that were using quite different tactics than those used in New York.  Am I saying the NYPD had no impact?  No.  What I am saying is that only people who suffer from “galloping true believerism” would be foolhardy enough to think that the major factor behind the New York crime drops was the policing tactics of the NYPD.

The major problem with the CPD making a large number of arrests is that it leaves the agencies further down the line in the system to deal with the results of these tactics, while simultaneously bearing the financial burden.  What results you ask?  Let’s take a look:

Now, since a vast majority of the arrests for low-level possession of marijuana do not result in convictions, not all of these expenses are incurred for every arrest.  The reality is that, to varying degrees, some of these expenses are incurred with many of the arrests, and not necessarily by the police, but by other agencies with separate budgets that are literally reporting to a different set of political leaders.

Cook County Board President Toni Preckwinkle seems intent on seeking cost reductions and reforms in the Cook County criminal justice system.  For these efforts to bear fruit, the CPD is going to have to be not only an active participant, but interested in a level of reform never before imaginable for the CPD.  This reality certainly collides head on with the quality of life policing that McCarty seems intent on instituting in Chicago.  It will very interesting to see if Preckwinkle’s reform agenda wins out over McCarthy’s CompStat / quality of life policing agenda. 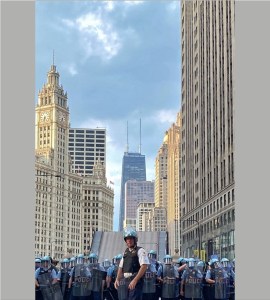