Rape by 23rd district officers and the missing “whole story”

It is always disappointing when the individuals trusted with assisting communities with security turn out to be perpetrators of crime and violence.  In this example, two Town Hall District officers are charged with heinous sexual crimes (rape) committed while on duty and paid by the public.  One would think that with the recent charging of these officers the story is over and the criminal justice system has responded appropriately to the misdeeds of these officers; however, I would argue that the public is being shut out of information we would need to make an informed decision.

A source has informed CJP that there were prior complaints against at least one of the officers for sexual violent crimes, but that the women involved recanted after a period of time.  If this is true then the public needs to be able to know and be able to review the response from the entire criminal justice system in each of those cases.  Why?  Because, if there is to be trust between the police department and community, it is vital that when incidents like this arise that the public has the ability to validate the response from the system.  The traditional Chicago and Cook County “Trust Us” response falls significantly short of adequate in all police misbehavior cases, but especially in a case involving such heinous crimes as this.

The public needs to be assured that all available avenues to pursue these officers, both criminally and in terms of employment, were fully exhausted.  It is inconceivable that the Department could have possibly kept either one or both of these officers on the street working under the color of law with badges and guns after even a single complaint for sex crimes on duty was received, regardless of whether or not the women recanted sometime after the initial allegation was filed.  If this is true then the Department and the individuals in charge have much to answer for, but the reality is that nobody can possibly be held accountable for their actions because access to the information needed to do so is restricted.

One of the new superintendent’s priorities needs to be freeing information from the clutches of those that seek to restrict access in order to protect rouge officers or the results of bad practices.  The citizens of Chicago deserve nothing less than a police accountability system that is transparent; anything less will be nothing more than a continuation of practices that have gone on uninterrupted for a century in Chicago.  The accountability system has only taken baby steps towards transparency while at the same time extolling all the virtues associated with transparency.

What they don’t want you to know:

The reality is that the short list of what the powers that be don’t want you to know about how the accountability system works (or doesn’t work) in Chicago is just the beginning about what we don’t know about how the criminal justice system operates both in our communities and behind closed doors. Chicago would be better served if officials stopped pretending to have a transparent system, and actually began using one. 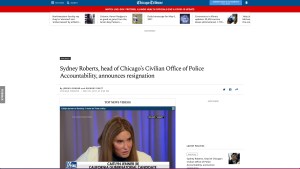