Accountability – CPD Officers – and the MATRIX

The biggest problem facing accountability within a police agency is often the culture.  Either the culture is one that nurtures an atmosphere where officers do not tolerate misdeeds by fellow officers or there is a culture, which is present in the CPD, where everyone turns their heads and ignores the misdeeds.  The current culture within the CPD is no different, for the most part, than the one that allowed Burge to flourish.  One does not have to look that far in the past to find an example where officers were running rampant and nobody new nuthin’ about it:  SOS.

Weis and Daley constantly talk about the status of the CPD-community relationship.  Until the communities most often affected by brutality and corruption at the hands of the CPD witness officers turning in other officers the relationship between the CPD and the community will always be in a terrible state.  There is rank hypocrisy displayed by Daley and Weis when they talk about the community’s need to break the code of silence.  Until the CPD does just that internally there is no hope of seeing the community follow, because there will be no trust off of which to build.  Simply, the CPD needs to lead by example and not say to the communities “do what we say not what we do.”

In reading John Conroy’s stellar reporting on the Burge trial, in particular the recent post on the topic of former Area 2 detective Michael McDermott, it becomes clear how far even former CPD officers are willing to go to protect one of their own.  In this example, McDermott down-plays the fact that he witnessed Burge with a gun drawn on a suspect in an interrogation room and that Burge had a plastic bag over that same suspect’s head at another point.  Of course, neither of these are clear examples of torture, right?  I mean just because they jive nearly 100% with what dozens of men have said happen to them does not mean Burge did anything wrong.  Horrible, but then again, why should we expect anything different?  Even in retirement, under oath in a federal court criminal trial, and in what seems to be a complete contradiction of his grand jury testimony, a former CPD officer continues to lie and turn his eyes to abuse and misdeeds of his colleagues.  Sad.

In the Sun Times this week they reported on an evaluation system called MATRIX used by various policing agencies across the country including many suburbs.  The problem, I did not see a single empirical research driven analysis that shows the program works.  I read some nice comments by a few police officials and a professor at Northwestern, but he works with the program so he should not be considered objective.  One of the assertions made in the article is nothing short of hilarious:

“We have practically eliminated litigation associated with negligent hiring.”

Wow, this thing has some significant powers, so say a few police chiefs and the company itself; all credible sources for sure.   The problem as I see it is this article seems to be pushing for the CPD to use this system but fails to provide any evidence, other than testimonials, that it does what it says it does.  In fact, I would not be surprised if the MATRIX public relations people wrote this article.  That is how little this article seeks to question any of the assumptions put forth by the company.

It is nice to know they have “practically eliminated litigation associated with negligent hiring,” but I would have to ask the company to define their terms and what data they are using to make this declaration.  I know I may be being too critical, but if this system is so magnificent then there should be some social science based research to validate it.  If not, that fact alone speaks volumes about the validity of this program.  Also, if you believe this press release, the culture of the department that the new recruits are entering plays no role in the eventual misconduct.  It’s only the officer’s pre-existing condition at work.  Hmmm…right… 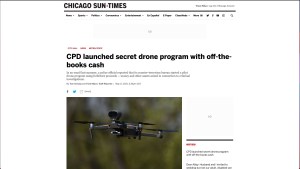