The Audit of Ceasefire….. (Part I in a Series)

One of the goals of the Chicago Justice Project is to enhance public discourse on issues where an open public discussion has been lacking or on issues where the discussion requires a greater degree of factual evidence. Nowhere is this more needed than in the discussion to re-fund the antiviolence program Ceasefire. Gary Slutkin, the administrator of Ceasefire, has recently made a strong behind the scenes push to get his program’s Illinois state funding restored. Coinciding with this effort several very favorable media articles appeared in both Chicago dailies and the New York Times Magazine, as well as an extremely favorable column by Eric Zorn of the Chicago Tribune. All of the media coverage has either ignored the audit completed by Office of the Auditor General of Illinois or dismissed the audit’s findings by attributing them to mere accounting deficiencies that could easily be corrected and should not prohibit the program from future state funding. Those that support the project have so far refused to openly discuss the findings of the audit. CJP believes that this is a mistake because all publicly financed projects must be held accountable for their actions, especially projects that are as potentially constructive as Ceasefire violence reduction model. Cited in much of the ongoing news coverage was a recent DOJ funded evaluation of the project by researchers at Northwestern University. I will address this study in a later part of this series.

The scientific validity of the results of the Northwestern study leaves much to be desired. In today’s installment I will dig into the results of the state audit and discuss why the findings are serious enough to prohibit future funding of the project with the current administrators of the program in place. My critiques of the program that are contained in this series are not in any way meant to be an attack on the notion of hiring former gang members. Those that have survived the urban gang experience have much to contribute to any solution that communities will find to gang violence. My critiques are also not aimed at the belief that local community driven agencies are not to some degree part of the solution. Rather, I argue that centralizing the funding through the Ceasefire program may not be the best way to get antiviolence funding to these communities. You can find the documents mentioned in the series in PDF format in our FOI Center.

From which State Department’s the money was distributed:*

Chicago Project use of Department of Commerce and Economic Opportunity FY04 Funding differed significantly from the purposes contained in the contract between UIC and the State. Funds were not used in the budgeted amounts but were transferred to other lines. Close-out documentation submitted June 15, 2005 – six months after the end of the grant period – showed that the Chicago Project spent 33 percent more than budgeted for the total of personal costs and fringe benefits; spent less than 1 percent on travel; and spent none of the money provided for subcontractors. The subcontractor funding was scheduled to be used for clergy mobilization; however, the Chicago Project used it toward the increased personnel and fringe benefit line items. DCEO followed appropriate Departmental procedures by sending follow-up correspondence to the grantee to obtain submission of the close-out report; determined upon review of the received document that it contained excessive variances; and has neither accepted nor approved the close-out report as of July 17, 2007. (Page V)

UIC information showed that $884,848 had been charged to the DCEO grant in their financial system – $134,848 more than the total grant from DCEO. A UIC official indicated that the grant was overcharged and that transfers to other grants wee processed during close-out. In May 2007, the official could not tell us what other grants these transfers went to. On July 27, 2007, 4 days after our exit conference, UIC officials provided information on the transfers; however, the information failed to adequately clear the issue. (Page VI)

UIC and the Chicago Project did not have an adequate system in place to ensure that contracts had been properly executed in a timely manner. As a result community partners were allowed to initiate work without a written agreement in place. In 18 percent (7 of 39) of the subcontracts reviewed, the agreements were not executed until after the performance period for the contract had expired. (Page VIII)

Community partners did not always receive the entire amount of funding provided by the General Assembly and outlined in the State budget. State funding agreements make no mention of giving the Chicago Project any discretion in utilizing funding provided by the State. During the audit period: The 39 community partner subcontractors received 83 percent of the named funding in State contracts from the Chicago Project. Over $1.1 million was withheld by the Chicago Project, generally during the FY05 and FY06, for program support expenses like the hiring of violence interrupters and core administrative functions. We found that the amounts withheld were not always consistent from community to community. There were other non-State funding sources that provided funds for similar activities, such as violence interrupters salaries and administrative functions of the Chicago Project. (Page IX)

Funding was provided by the DOC (Department of Corrections) through a memoranda of Understanding (MOU) between the Department and UIC. We found that, during FY06, DOC provided funding for Ceasefire outside the payment terms of the agreement. Additionally, during FY06, we found that the Chicago Project was charging an administrative fee to each of the community line item amounts that was not delineated in the MOU with the Department. (Page XII) The Auditor General goes on to note additional problems associated with the program and its ability to hold community partners accountable for their work.

That said, not a single critique listed here from the audit has much to do with the quality of work from community partners and has everything to do with the decisions made by administrators of the Ceasefire program. It is clear from the audit that Ceasefire played fast and loose with the State’s money and failed to live up to its responsibilities under the contractual agreements it entered into with the various state agencies. To date Ceasefire has yet to explain why it withheld a percentage of the money directed to its community partners, on average about 17%, and spent that money on personal and fringe benefits. It is important to remember that Ceasefire engaged plenty of community partners and withheld money as a regular practice and failed to detail it in the contracts with the State. This certainly seems unsettling at the least and leaning toward underhanded or deceitful. Any non-profit that got caught failing to detail what it was doing with this much money as part of the daily operations of the organization would face the loss of their funding. This problem is not an accounting error, it starts from the time Ceasefire sends in a grant proposal with the State and continues into the daily operations. No other explanation can be logically assumed without the inclusion of a purposeful desire to deceive the State on the withholding of part of the money directed to its community partners. The allegations contained in the audit and detailed here have not made it into the press coverage associated with the push to restart state funding of the project. Slutkin has been very adept at marginalizing critics of the project and framing the loss of state funding in the context of the budget crisis in the summer of 2007. In later additions of this series I will talk about how Ceasefire was the beneficiary of State politics not the victim. Ceasefire lost its State funding because of the highly questionable financial dealings it engaged in, not because of State politics.

Additional parts of this series will cover: 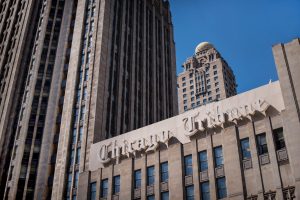 Analyzing Media Coverage of Chicago Gun Violence Over the Weekend

On Monday morning, the Chicago Sun-Times reported that 40 people were injured and five people were killed this weekend by gun violence in Chicago. The