I wrote about the underlying civil suits involved in generating this new rule a few years back. You can catch-up on my past posts about these cases here: Part I, Part II, Part III, Part IV, Part V. The recent article by Chicago Tribune reporters David Heinzmann and Angela Rozas covering the new 48 hour rule fails to ask important questions that are in the public interest. The Chicago Police Department has a long history of using abusive tactics during interrogations. The reporting lacked any historical perspective that would have provided numerous examples of abuse associated with Chicago police interrogation practices. True to crime and justice reporting in the Chicago media, the serious questions that could inform the public discourse on this important issue were never asked. The first and most important question to ask would be about the legitimacy of holding people for 48 hours without judicial review. Detention without judicial review means that the restraint of an individual’s liberty is being authorized on the suspicions of a few police officials. A second question might be how many individuals per year have been held past 48 hours without judicial review and what was the result of these detentions? In the civil suit that instigated the current class action suit in question, Joseph Lopez  was restrained for four days before finally confessing falsely to a murder he never committed. Another individual confessed to the murder just a few weeks later.

I ask you, is this the outcome Chicago citizens are seeking from our police when they investigate a murder? In whose interest is it to use coercive tactics to produce a false confession from an innocent individual? They arrested Lopez on suspicion without evidence to back up their suspicions and failed to ever produce any despite his lengthy detention, so a coerced confession was their only option. Why would police officials arrest an individual without the evidence to charge the individual? If on the rarest of circumstances a legitimate case does come up are the police powerless through the use of the court to legitimize the detention? I am not sure, but the reporting by Heinzmann and Rozas has done nothing to educate the public on any of the important issues surrounding this topic. An additional follow up question might be whether or not the power of arrest is being used to restrain an individual while the police build a case. Should the case not be built prior to the arrest? The 7th Circuit Court of Appeals said as much when they reviewed Lopez’s case and found for the plaintiff saying, “Here, the defendants offered no reason for the five-day delay other than the continuation of their investigation, but delays for the purpose of gathering additional evidence are per se unreasonable under McLaughlin. Id.; see also Willis v. City of Chi., 999 F.2d 284, 288-89 (7th Cir. 1993)”, (US Court of Appeals 7th Circuit, pg. #3). The rhetoric generated by members of the Chicago Police about how this new rule will damage their ability to solve crimes rings hollow. This rule only brings the practices of the Chicago Police Department in line with precedent-setting US Supreme Court cases and recent findings by the US Court of Appeals. The Chicago Police attempted to bring this same distorted logic to the federal courts back in 1986 when they lost an identical class action lawsuit stemming from the same practices. At that time they informed the US Court of Appeals they had rewritten the general order ending the practice of holding suspects past 48 hours. The reality is they did not stop the practice. Lopez’s confession to a murder he did not committee some 15 years later is just a single example of the problems with this practice. Is it not time the police department we invite into our community to assist us in securing our neighborhoods operate more in line with US Supreme Court precedents and less by coercive tactics? 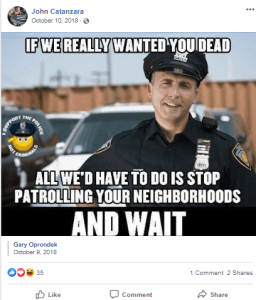 Catanzara: A 23 Year History of Misconduct